I love mixing colors…traditionally or digitally.  There is something so wonderful about looking at colors as they develop.  I have to admit, I haven’t been completely happy with Corel Painter’s mixer pad.  It does a good job, I’m not saying that, but I have difficulty with it.  I’ve seen others mix lots of colors beautifully with it.  And, there are some who never use it at all.  While making my latest set of watercolor brushes, I noticed that some mixed colors better than the mixer pad.  I started testing and actually went back to the default Watercolor category in Painter 2015 and started using Watery Glazing Flat variant to mix colors directly in the document.  I bet other transparent glazing type variants would work as well, but I haven’t tried them.

The transparent character of watercolor variants allows the paint to mix optically, which is why it is so beautiful in my opinion.  It is possible to mix very vibrant colors, too, but I was going for more subtle combinations of soft colors.  This image is a mix of Phthalo Blue Green, Cadmium Yellow Deep, and Permanent Alizarin Crimson.  This one is the most vibrant of the ones that I did today.

The next two examples are definitely more subtle and softer.  I love the grayed feel of the colors.  The top three rows are French Ultramarine, Aureolin, and Permanent Carmine.  The last three rows are Phthalo Blue Green, Quinacridone Gold, and Permanent Alizarin Crimson.  I am so attracted to these types of colors.  I know this is a personal thing, but they do seem luscious to me.

OK…want to know how to do this type of color mixing.  It really is easy. In the first video, I start using Corel Painter’s mixer pad.  It is fine and I get good color, but when I switch to mixing the same colors with a watercolor variant, I get many more choices…and I think better choices.  But, judge for yourself.

In the second video, I mix three colors in one area using the watercolor variant.  Then I sample the colors created.  It is pretty cool.  To alter any color, I can simply add more color to an area.  That is hard to explain.  Watch the video.

In part 3, I again use three colors painted inside of a selection.  But this time, I drop the layer to the canvas layer and add a new white layer with a composite method of overlay.  Doing this, brightens the mixed layer.  Now I let Painter do the work and create a new color set from a selection.  Deciding how many colors is always problematic.  But, I really think 16 is the highest number needed and 8 might be just as good.  What do you think?

As usual, I go off on a tangent in video 4, but I think it is an interesting tangent.  I am still mixing colors using a watercolor variant, but instead of using the traditional concept that the primary colors are Red, Blue, and Yellow, I use the correct version of Cyan, Magenta, and Yellow.  What?  I knew you would say that. I know it is crazy.  I toyed with this concept for several years and it is hard to wrap my head around it.  Basically, old Issac Newton thought the primary colors were Cyan, Magenta, and Yellow, but he couldn’t prove it.  I think in the late 1800s or early 1900s, scientist began to tell us that the real primary colors were Cyan, Magenta, and Yellow.  What makes them primary is that they cannot be mixed and a mixture of them produces black, which is the same thing I have thought about Red, Blue, and Yellow.  I am almost used to the idea that Pluto isn’t a planet and now this.  Of course, I thought this was about light, but not pigments.

Hold on, not so fast…did you know that there are paint companies now producing tubes of Cyan, Magenta, and Yellow as primary colors.  Not all of course…this change will take some time and a steep learning curve…especially for older dudes like me.  But, I have to admit, I find the concept strangely appealing and very interesting.  And there is something to it.  Take a look at the video and watch me mix blue and red.  Something, I didn’t think could be done.  Now, I haven’t tried this traditionally, but I’m thinking why not.  So, what do you think about Cyan, Magenta, and Yellow as the real primaries?

The next video probably is overkill.  I continue to mix Cyan, Magenta, and Yellow, plus the secondary colors of Red, Blue, and Green.  I was curious more than anything else.  I wondered what colors would emerge.  Really, once you get past the Cyan, Magenta, Yellow start, it seems pretty much like the traditional mixing methods.  Actually when all is said and done, color mixing is pretty much intuitive or innate.  But I do find the explorations fun.

I hope you enjoyed the techniques and will give them a try.

Jason Maranto is now teaching at the Digital Art Academy.  His first class is Painter 2015 Brush Engine Essentials, which Jason follows with Painter 2015 Brush Engine Extended.  Trust me on this…you do not want to miss his classes.  I think Jason is one of the best teachers around and the way he explains how to make brushes in Painter is extraordinary and very easy to understand.  He has a simple no-nonsense approach to brushes.  This is what he says about his class:

“Mark-making is at the heart of what it means to draw and paint. Corel Painter is a an incredibly powerful mark-making tool. However, due to the huge range of mark-making potential Painter offers, the brush engine can seem intimidating and arcane to even very experienced Painter users.

This “Essentials” course is designed to teach the most essential parts of the Painter 2015 brush engine. The information is structured to help the student quickly and efficiently maximize their brush creation and customization skills with the most common types of dabs, media and controls.

Each week (starting October 12th), that weeks group of videos will be posted. Please watch the videos, and if you have any questions about what was taught that week, ask in the designated forum.”

Registration is still open for Jason’s class.  You can register during the first week; registration closes Saturday Oct 18th.

Again, this is the best brush class around.  Don’t miss it.

Here is an example of Jason’s Spring Flame Glow Brush.

And here are some marks made with his Flow Flare Brush. 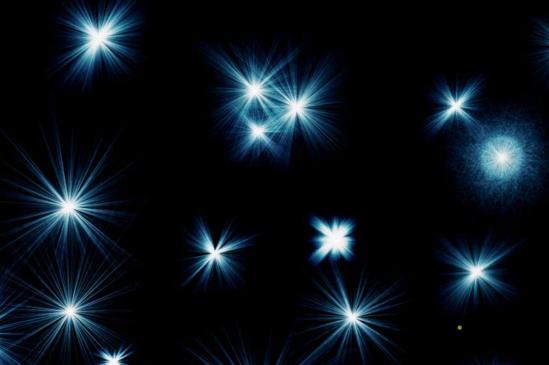 Winifred Whitfield has joined the Digital Art Academy team and is starting her first class tomorrow, Matisse Inspired.  Winifred has studied Matisse at length and developed a wonderful digital style inspired by this master.  I love looking at her examples, the bright colors, the simplified forms, and the magnificent patterns.  I know you will want to take this class.  She is teaching it in Corel Painter X3 and Corel Painter 2015.

It starts tomorrow.  Is it too late to register?  Absolutely not.  Registration always stays open for the first week of class, but after that registration closes.  To register for the class, you will want to go the Digital Art Academy and sign in if you have an account.  If not, look to the right side of the page and select Create New Account.  Follow the prompts.  You must create an account before you can register for any class; this doesn’t register you, it just allows you to register when you wish.  If you have any trouble, then take a look at the PDF How To Register and Enroll in a Class at Digital Art Academy.  Once you registered all the wonderful videos and resources that Winifred has for you are available.

The amount of resources Winifred makes available is amazing.  And all are downloadable to your computer for you to view over and over at your leisure.  You will upload your assignments and Winifred will give you helpful hints and constructive criticism about your work.

Take a look at some of Winifred’s images for the class.  I particularly like the work inspired by Matisse cutouts. 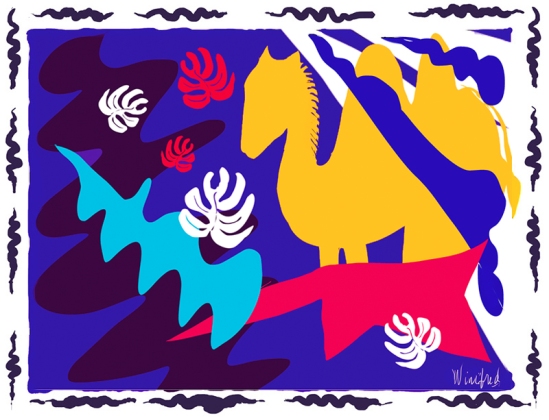 This window is very striking: 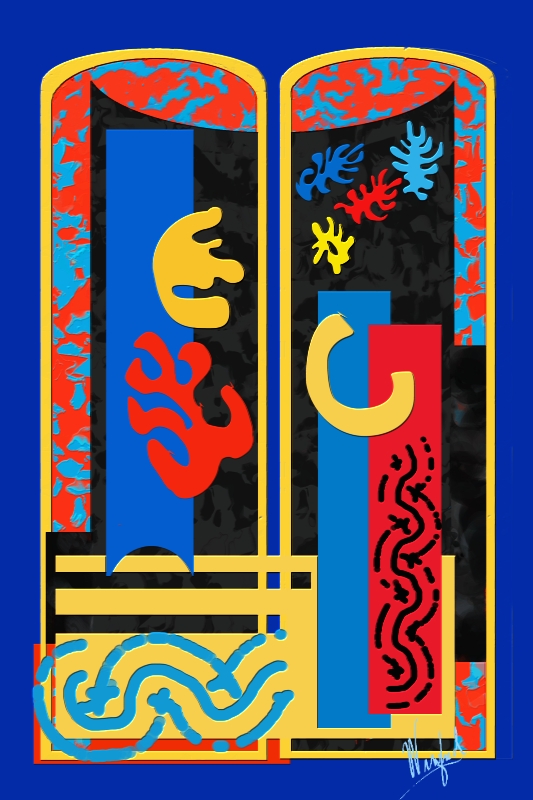 I know that her class will go into depth about how to make patterns with Corel Painter.  Making patterns is great fun; you will love it. 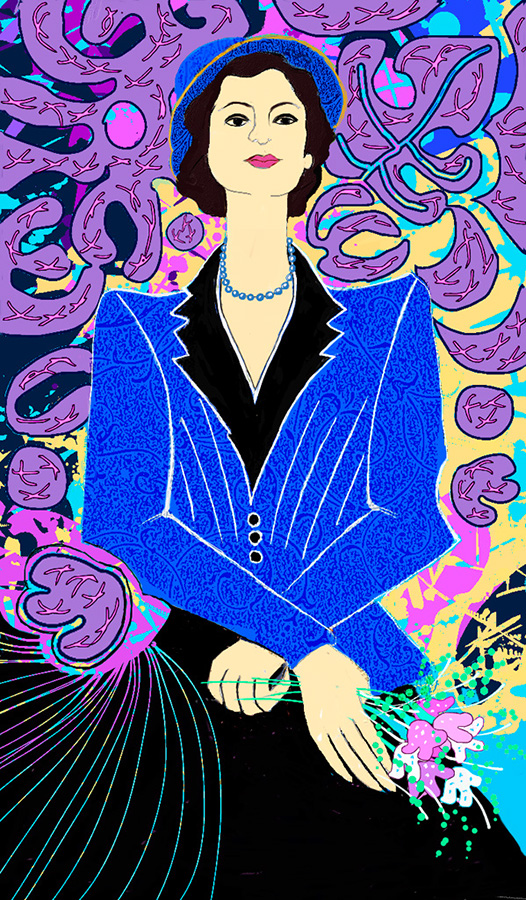 I hope to see you in the class.  I wouldn’t miss it.

Do go to the Digital Art Academy and register for Matisse Inspired.  It is a good decision.  Winifred is an accomplished artist and teacher; learning from her is easy.

Remember, you can register anytime in the first week of class, but don’t wait; don’t miss a single day with Winifred.