I think this technique is brilliant.  Karen’s blog is a must see.  Beatiful paintings and wonderful digital techniques can be found there.

This effect can be used on any finished painting or your work in progress.

Select a paper texture. For this example I used the Sandy Pastel Paper.”

For the rest of the story click on the link below.  It is an easy and effective technique.

I was in Karen Bonaker’s Paint with Me class recently and was working in watercolor. Frequently, I will mix watercolor and digital watercolor variants to get the look I want. I guess I never noticed this before, or never tried it with watercolor, but the Pickup Underlying Colors option was active in the layers panel. And when I began to paint with a digital watercolor variant over the watercolor layer, it picked up the colors and began to blend them. I know what most of you are thinking. He never tried Pickup Underlying Colors before, right? Well, I have; I use it all the time with other media, but for some reason I had not used it with watercolor.

“And you think I am going to believe you?”

“Kevin, leave me in peace. May I write one blog post without your interruptions.”

“I am to real! We established that with Uncle Tim. I am a good virus like Glenda the good witch in the Wizard of Oz,” he screeched.

I turned back to my computer and began typing, but I guess you know that. Sometimes I get confused and wonder who I am talking with, the imaginary virus or the imaginary folks who may be reading the blog. But I digress.

So I was in Karen’s class, and I started applying paint using my Splashing Water > Digital Sq Pool Blender and was shocked to see very rich colors and some cool blending happening. As you would expect, color from the previous layers added to the richness of the current layer colors. To demonstrate, I didn’t know which would be better, a painting or a video. I decided a video, but in the video, I mentioned that I hadn’t used the technique in a painting, which is only partially true. There was the painting in Karen’s class, but I haven’t actually finished the painting. That means I haven’t actually used it in a painting, right?

“Exactly, now do you see why I cannot believe you. Your thoughts are so frigging convoluted.”

To continue: I then decided it would be fun to use the Kaleidoscope Painting tool and make a finished example, which I did. However, even though I used the blending technique, it doesn’t show very well. I lost myself in the pretty colors. That Kaleidoscope Painting tool is addictive. It is hypnotic. I know it can be used to make beautiful paintings; one of my students used it to make an umbrella being held by a bathing beauty. It was terrific and very creative. I was just playing for the sake of playing. Hey, I’m retired, I can do that.

Next is the image I made and following that will be the video tip. I hope you enjoy them. Don’t be afraid to leave comments.

Next is the quick tip video.

That’s it for this post. I am getting a fair number of hits these days and I really appreciate the visitors. Stop by often.

Sue made a comment on the last post that the bamboo would look good printed on silk.  It was a timely comment because I had just finished a piece with a background that looks like the piece was printed on silk.   I called this one wind.

Today was the first day of Open Studio at the Digital Art Academy.  Time to give my shiny new brushes a try.  I dubbed them Eastern Water in deference to sumi-e style paintings.  I wish I could tell you that I successfully culled them, but strangely the numbers increased to a colossal number, 42, which has cult status and is the answer to the ultimate question of life, the universe, and everything.

Armed with the answer to everything, I began to paint the assignment, cherry blossoms.  My first attempt was rather stiff, as was my second, third, fourth and fifth.  Then I had an “aha” moment.  I noticed the weeping cherry in full bloom outside my window.  Duh, it is much easier to paint when you have the real thing as your reference.  I cut a branch and brought it inside.

Have you ever tried to put weeping cherry in a vase.  I’m sure florist know how to do it, but my little weepy branch kept falling out.  I finally propped it and vase in a vertical position, which meant the flowers were upside down.  I found a workaround.  I painted a little; extracted the branch from the vase and observed the flowers in their normal position, and then returned them to the vertical.  Hey, the answer to everything is pretty handy.

Alpha channels are pretty handy in Painter, too.  Alpha channels are defined as a storage device for selections, but I think of them as super selectors.  To start this painting, I first created an alpha channel.  My intent is not to make a tutorial about this painting, but simply show the workflow through a series of screen shots.  This is the alpha channel after painting it with short vertical strokes.  When a selection is created the black areas will be protected and the lighter areas are available for paint, which is just the opposite of a layer mask.

I added a watercolor layer.  Using my Textured Fill Wet variant I lightly and softly identified the areas where the blossoms would be. 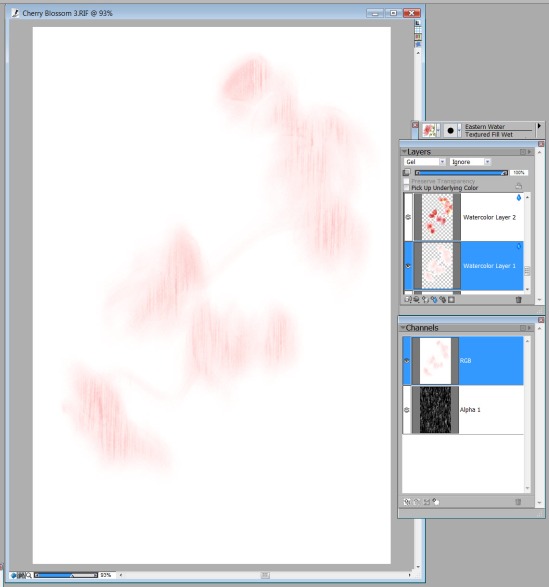 Determining the placement of the flowers

Added an additional watercolor layer; I work with a lot of layers.  I used my Chrysanthemum Sharp variant to give some form to the flowers.  I inadvertently continued painting on this layer with Iris Blade, but I wanted to be on another layer.  I deleted what I could.

Giving some form to the flowers.

On the third watercolor layer I used Iris Blade to give a soft overlay that looks like a petal.

The center of the flowers and the branch was painted on layers 4, 5, and 6.  I used several brushes, Chrysanthemum Sharp, Bamboo Texture Sharp, Thistle, and Plum Anther. 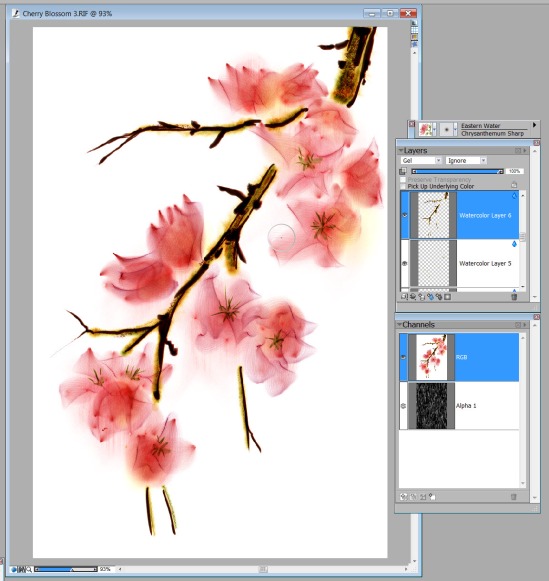 Added flower details and the branch in the next three layers.

Layers 7 to 10 finished the details of the painting, buds and the first early leaves just barely showing.  At this point I did an Iterative Save and then dropped all layers.

I didn’t like the composition and added some canvas to the left and bottom of the image.  Also added my name in Chinese characters, at least I think that is what it is.  I got it from one of those sites that claims to write your name in Chinese; it could be profanity for all I know.

Improved composition by adding area to the left and bottom of the canvas, and added my signature in Chinese characters.

When I increased the size of the canvas, the alpha channel did not have any texture in the extra area.  I created a new alpha channel that was the correct size and with the same style texture.  I loaded the selection from this channel and in two layers painted the background.  I reduced the opacity of the layers for the finished piece, but in this screen shot I left the background at 100% opacity so you can see the texture.

Added texture from alpha channel selection. In the final piece, the texture will be reduced in opacity greatly.

I added a frame to finish the work.  I hope you enjoyed this quick look at the workflow of this painting.

Added a frame for the final image

Here is the zip file of the Eastern Water Brushes.  They are compatible with Painter IX, X, and 11, thanks to Brush Master David Gell, who has created a script to automatically adjust the brushes for backward compatibility.  The brushes can be installed using the Studio Chris Brush Manager.

Zip file will be added later; I can’t figure out how to add it now.